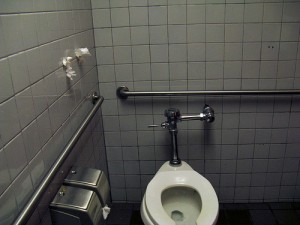 Have you ever used a public restroom? More importantly, have you ever found yourself utterly terrified to actually sit on the toilet? You are not alone in that sentiment. Actually, you may be among the many who have invented new types of acrobatics in order to avoid actually making contact with the toilet seat. After all, that is why most stalls have handlebars built in.

All joking aside, sanitary toilet seat covers have become the standard in the majority of bathrooms, and with good reason. They are both inexpensive, and they allow individuals to sit on the toilets without worrying about germs or the possibility of infection. On the other hand, they sometimes cost more than they should, even if the price per unit is reasonable.

Even the best sanitary toilet seat covers have their shortcomings, namely the fact that they often end up in the bottom of the toilet no matter how well they are placed. In addition to that, rather than fishing the sanitary toilet seat cover out, people tend to flush them. This can easily turn cheap toilet seat covers into an expense of several hundred dollars when you find that you need to call upon the services of a professional plumber so that your facilities might continue their normal operation unimpeded by septic related problems. That being said, you need to find a way to avoid this at all costs, and of course make sure that your facilities still have access to sanitary  toilet seat covers of some type. This is where Brill saves the day for you. 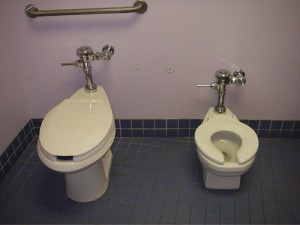 Assuming you are not terribly attached to your current toilet seat covers, it would be a good idea for you to think about swapping them out for Brill toilet seats. This is a different type of sanitary cover system, but it will require you to literally replace the toilet seat rather than simply place a cover on it. The difference between the Brill toilet seat cover and any other however is absolutely astounding. The toilet seat cover in question does not simply lay atop the seat, but rather envelops it so that the user is completely protected from germs of any sort. In addition to that, you will also find that the replacement of the cover is automatic.

When the user sits down, they will trigger the rotation of a new toilet seat cover which will replace the old. As the old cover retreats into the device, it is simply severed and discarded so that it will not come around again. This method is outstanding and far different from most other toilet seat covers on the market. As far as sanitation goes, this is a win win situation for both the customer and the business owner.

The Brill solution has been employed in many different locations. From the highly popular casinos in Las Vegas, to restaurants like McDonalds, the Brill toilet seat has become an instant success and incredibly popular among customers. In fact, many female customers (the toilet seat having been primarily tested in women’s bathrooms) have stated that they are no longer afraid to use the restroom. A live news report actually reported that many no longer resorted to the strange acrobatics that we mentioned earlier which is most definitely a great step forward. That being said, this is going to be one of the greatest improvements for toilets that the commercial world has seen in many years.

This is something that your business cannot afford to go without. There are plenty of different sanitary covers for toilets on the market, none of which seem to meet the Brill standard. Stop wasting your time and money on cheap alternatives and start using what has been proven to work. It’s all up to you now, so make your bathroom a clean one.