Now wait a minute, you probably didn’t think about that, did you? It’s not something that you think about on a regular basis, but more something that sits dormant in the back of your subconscious mind – it’s a thought that you probably never considered, but yes, at this point, you do expect to see toilet seat sanitary covers as they have become incredibly common today – and with good reason.

Here’s the thing, toilet bathrooms can be disgusting and there are many people who avoid them based on what they’ve both heard and seen – sanitary toilet seat covers can help to alleviate some of the concerns you might have.

A Quick Look back at Toilet Seat Sanitary Covers 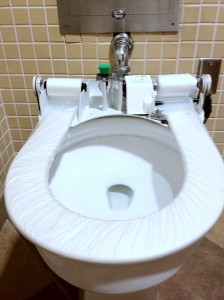 The idea of a sanitary toilet seat cover came around in 1977, or at least that’s when the patent was filed. You have to imagine that the concept was thought of long before that – who wouldn’t have wanted to protect themselves from toilet seat germs prior to 1977? The patent number, US 05/672,052, pointed to a very simple idea conceptualized by Lionel J. Marceaux who created a very easy to use disposable product. You would simply remove it from the dispenser and place it on the toilet seat, sitting on it while you used the facilities.

Unfortunately there are many concerns over whether or not this type of coverage actually works, the main concern being that it won’t take care of any viruses or bacteria at all because they cannot survive for long enough outside the body, and even in the event they did, you would need an open sore to contract them.

There are however many environments in which this is an actual concern, nursing homes and hospitals for example where there is a real, legitimate threat of disease transmission. Other, more potent viruses and bacteria such as staph and ringworm remain a significant and realistic concern, making toilet seat covers more important than ever. There are however some financial concerns surrounding toilet seat covers, for example the threat that they will be flushed down the toilet, ultimately causing a clog.

In addition to that you may have to pay your janitorial staff more as they will need to clean it up on a regular basis – it’s not the path you want to go down, period. Still, you need a way to protect yourself and your guests from the potential spread of bacteria, and Brill Seat has the best solution you could ask for. 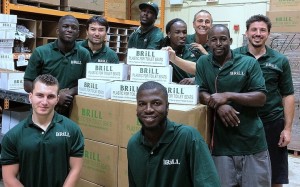 When you’re at this checkout line, you want to ask for plastic, not paper. Sure, you might think that paper is better is better for the environment, and at the grocery store it probably is, but in this scenario you are looking at something entirely different. The Brill Seat solution makes use of a plastic sleeve that wraps around a custom toilet seat, and motion sensors rotate the sleeve each time the individual stands up from the toilet.

If that’s not the most amazing thing you’ve ever heard of, then we would be hard pressed to figure out what is! That being the case, now would be a great time to start considering the Brill Seat solution whether you’re running an office, nursing home, rest stop, or even a casino. There are so many places that can make good use of the brill seat solution and we’re only listing a few of them. It’s all about keeping you and your guests properly protected from bacteria, and in our opinion, this is the best you’re going to get.