The Brill Company has developed the best sanitary toilet covers for use in public restrooms. These covers have already been acquired by companies who are giving testimony of the product in highest praise. Not only does the company manufacture protective seat covers that ease the customers using public restrooms, but the owners, as well as maintainers of the companies using them.

Brill automatic toilet seat covers can be used in the simple detection of motion by using the hand to automatically dispense the plastic covers, while simultaneously cutting the already used one with a blade on the opposite side of the product. Consumers find that this invention is easy to use, and greatly reduces the scare of germs in public restrooms.

It has been aforementioned that the use of this product is in itself reducing the amount of waste given off by customers using public restrooms. By using these cheap seat covers, companies notice that the amount of toilet blockage, waste filling public trashcans, and the previous paper covers that were not indispensable, have decreased.

With past products, the attempts to use covers that would sit on top of the seat, without being held into place, often had a negative effect on the users.First off, using the paper covers, the customer may frequently attempt to use the product, only to drop it in the toilet itself. On the other hand, people attempting to use many sheets of toilet paper would stand the risk of flooding the toilets. Those who choose not to try to flush the paper, leave it on the bathroom floor or fill the trashcans with the waste, all the while still creating the need for cleaning of the rooms frequently.

Using the sanitary toilet seat covers would go a long way in getting rid of the scare of public restrooms for the foreseeable future. Many consumers know the worry of leaving the house for the store and having the need to use public restrooms. While this is a very real scenario, most never want to set foot in the restrooms, meaning their satisfaction with the stores being shopped at may dwindle down. With the installation of the cheap toilet covers, however, this daunting realization doesn’t have to be so worrisome. Consumers are already allotting their praises to the company, and can see the long term benefits. 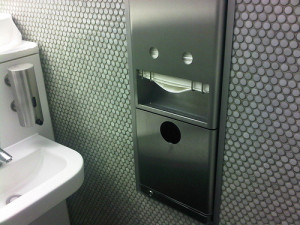 With the buildup of technology in the 21st century, it is common people may not know how to use some of the products that use the kind of technology introduced in the era. However, the technology surrounding these sanitary toilet covers is easily manageable, and useable by all consumers. Unlike smartphones, tablets, or new touchpads, this technology can be used by the masses.

To use the seat covers, you simply use the sensor on the left side of the toilet seat to detract the disposable covers. Once disposed, the seat is ready to be used by the consumer. After used, the Brill installation on the toilet has a razor, which is covered up by the plastic of the installation to ensure safety that discards the used seat for later removal by the cleanup crew. Being so easily used by the masses, the invention has been embraced by many big name companies. The covers are already cleaning up the sanitation of public restrooms that have been in question for so many years past.

Being such a mandatory field of use in stores, bathrooms have needed a way to improve the conditions in which their customers had to deal with in public bathrooms. With the obvious rise of technology in modern days, the sanitation of many bathrooms previously in question comes with praises all around by the customers who had the opportunity to use such a viable invention. With the industry for such a need growing, the Brill disposable toilet covers have taken public bathrooms by storm, and while doing so, have cleaned up conditions so the average person may feel more comfortable when faced with the need to use them. The covers are for everyone’s use, so the success of the Brill toilet covers was inevitable.